On this anniversary a new feature was released to make it easier for you to automatically share the best content of the site in social networks.

Read this article to learn how this automatic sharing feature works and how you can get more recognition by raising in the friends of the site ranking.

13 Years and 1.1 Million Registered Users After

Less Redirection during the Registration and Login process

13 Years and 1.1 Million Registered Users After

Yes, the PHP Classes site is now a teenager. It was about 13 years ago that the site was officially launched.

Many years have passed and the site is much larger. Just these days the site reached 1.1 million registered users. Many of those users are no longer active but that is still a lot of people accessing the site and benefiting from the content that is shared by over 3,300 authors.

The development of the site never stops. In the latest times several features were implemented to improve the site user experience and attract more talented PHP developers to contribute even more great PHP content.

The site registration system has always been of point of great criticism from the site users. One of the criticisms is that people do not want to register in yet another site because it is bureaucratic, wastes time and patience.

Therefore, a few months ago it was implemented a new way to let the users register and login using their accounts on Facebook, Google (Gmail or other) or Microsoft (Hotmail or other).

The accounts site does not use any information of those sites besides your e-mail address, which is used to determine whether you already have an account in the site with the same address or you need to create a new account. Other information may be used to pre-fill the registration form, but new users can change that information if they want to.

The greatest advantage of this form of authentication is that it is no longer necessary to verify if the user e-mail address is valid, as such sites already have done that at least once in the past. The e-mail verification is important to prevent the creation of spam accounts that could be used to commit fraud in some of the site contests.

For now only these sites are supported because they are the most popular sites on which many users already have accounts. Support for accounts of other sites like Yahoo and Twitter will be added later. It will require the development of a component that supports oAuth 1.0 protocol. For now only oAuth 2.0 supporting sites are supported.

Less Redirection during the Registration and Login process

The integration with the Icontem Accounts site has also been improved. For those that are not familiar with that site, it is a central site that manages all accounts of the users of both the PHPClasses and JSClasses sites.

The Icontem Accounts site was launched in 2010 as a means to provide single sign-on support. This means that the users only need to have one account to access the PHPClasses, JSClasses or other Icontem sites that may exist in the future.

The problem is that the OpenID protocol does not seem to provide a means to distinguish whether the user is trying to register or log in the site. This causes some complications, for instance when the user clicks on the PHPClasses site login link but he ends up needing also to register a new account on the Icontem Accounts site. Then the user is returned to the login welcome page but he still must complete the registration phase on the PHPClasses site.

In the past the site was redirecting the user between all the pages and showing messages to let him know what is going on. However this was causing some confusion because the users were not realizing the fact they were actually registering in two sites and did not want to keep clicking on proceed links as it seemed that something was not working well.

Since some time ago this procedure was improved to just redirect the users showing the least possible amount of messages. Hopefully now it is much less annoying, but there may still be room for improvement. Just let me know if you have registered recently and still feel the process is confusing.

I do not know any user that comes to the Internet saying "I want to see advertising". So advertising is usually undesirable. Unfortunately advertising is necessary to keep the site financially viable. If it were not for that face, you would not be seeing any advertising in the site pages.

However, since 2008 the site has been gradually reducing the advertising placed in the its pages. In 2010 it was introduced a new technique to make the pages load faster by deferring the load of advertising and other content loaded using JavaScript from remote sites. The user experience improved a lot because now the users do not have to wait for the advertising to appear to see the pages' content.

Recently there have been efforts to change the placement of advertising to disturb less the users. These efforts will continue and soon you may notice changes in the way advertising appears.

Still, for the less tolerant to advertising, they may all purchase a premium subscription for a quite inexpensive amount of $5 a month (or less if paid annually) and access the site without advertising, among other exclusive benefits for premium subscribers.

Alternatively, if you submit innovative packages to the site and you are nominated for the PHP Programming Innovation Award, you are entitled to a free lifetime premium subscription. It is a fair reward for those that contribute with innovative components.

As with any site of user contributed content, the more talented users are attracted to the site, the better will be the content that is submitted to the site.

One way to attract more talented users is to share information about the content that is already available in the site in places that many other people can see it and eventually become interested.

Nowadays social networks are some of the best places to share content where many people can see it. The site already provide buttons for you to share the site content in several social networks, but doing it manually is a tedious task, and so many users do not bother doing it.

Therefore it was implemented a new feature that lets you authorize the PHP Classes site to automatically share in social networks on your behalf the best content published in the site.

This is not a new initiative. Many sites do this already, and so they get many new contributors this way. It was about time PHP Classes started doing it as well. This feature was planned in early 2011 but only now there was time to implement it.

All you need to do to participate is to go in the User Options page and click on the Social Networks link. There you can link your PHPClasses account to the accounts of social networks you participate.

For now you can only link to your Facebook account. In the future you will be able to link also to accounts of Twitter and other social network. 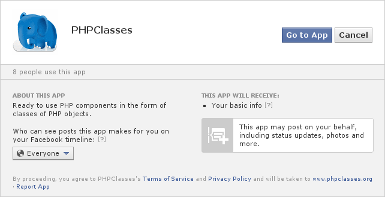 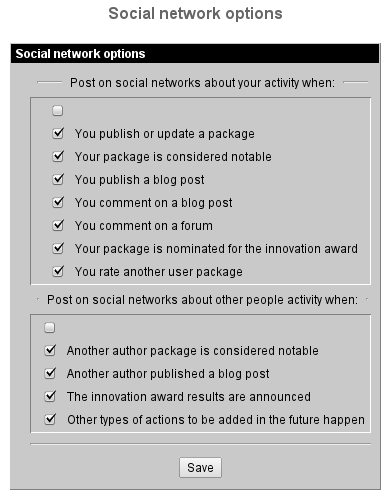 Most of the options are about content that you submit to the site like: new packages, blog posts, forum comments, award nominations, etc.. There are also options for posting to your social networks when great content of other people is published, like notable packages, posts in the main blog of the site, innovation award results, etc..

If you participate in the content sharing initiative, your contribution will not be left without compensation. The site is tracking the users that follow links shared in social networks this way. Special parameters are appended to the link URLs, so the site knows which users shared content that lead new users to subscribe to the site.

Since the beginning in 1999, the PHPClasses sites always provided ways to recognize and reward contributors that have helped making this site a better resource for over 1.1 million users that have come to the site.

The site updates several types of rankings and publishes top charts that distinguish the best contributors in many aspects. However, until now there was not a single unified way to rank contributors according to all good contributions that have made in the site. That is about to change.

The last of a long list of features planned in early 2011 to promote better the best contributors of the site is a unified reputation system that determines the rewards and privileges that those contributors may earn due to their contributions.

I cannot comment much on the details of this yet because it is all still pretty much on the planning phase but some of the most dedicated site contributors are already helping in defining the way that system will work.

If you would like to contribute and suggest reputation criteria or privileges to be given to reputed users, please go in the site features forum and send your suggestions.

The PHP Classes have gone a long way. During its life time, many users have benefited from its features. Others have sent complaints about its deficiencies, but with time and patience many of the complaints have been addressed to make the site a better resource for all.

Certainly there is still a lot of work to be done to make it even better. Sometimes you may notice that there are situations that still need work but the perception of what needs to be done is not clear. Fortunately I listen and appreciate well done criticism. That only has helped the site to evolve over time.

No comments were submitted yet.